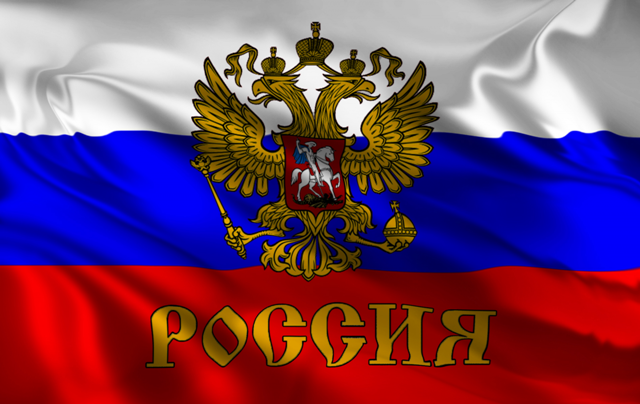 The state symbols of Russia are the Russian flag, the hymn of Russia and the coat of arms (герб).

The national emblem of Russia is the double-headed eagle. It is the most ancient symbol of Russia. Originally, it was one of the symbols of the Byzantine Empire. It was introduced in Russia in 1497 by Tsar Ivan III after he had married the niece of the last Byzantine Emperor, Sophia.

The Russian coat of arms consists of  the double-headed eagle which has the figure of a horse rider who spears a viper upon its breast.

Another symbol of Russia is Spasskaya Tower, because the Kremlin clock  is on it.

The official name of the country is the Russian Federation or the RF.

Under the Constitution of 1993 Russia is a Presidential Republic.  It is headed by the President who is elected for a four-year term. The President is commander–in–chef of the armed forces, he makes treaties, enforces laws, appoints the Prime Minister, cabinet members, and key judges. The first Russian president was Boris Eltsin (since 1991).

(1) Legislative (Federal Assembly, which consists of  Federation Council (upper house) and State Duma (lower house). The  Federal Council is not elected. It is formed of the heads of the regions;

(3) Judicial (the Constitutional Court, the Supreme Court, and regional courts).

The State Duma is a lower house of  Federal Assembly, which consists also of an upper house-Federation Council.  The members of State Duma are elected by popular vote ( голосами избирателей) for a four year period.

Russia is a democratic society. Its citizens have many freedoms, among them freedom of speech, religion and the press.

The Russian language is the official language, but not the only language which people speak in Russia. Members of more than 60 other ethnic groups who live in Russia speak their own languages.

The great majority of the population of Russia is Russians. Russia is inhabited by sixty other nationalities.

Russia is densely populated, but its population is unequally distributed. People prefer to live in the European part of the country. Siberia is thinly populated.The northern part of Russia is practically uninhabitable because of the length and severity of its winters. Russia is an urban country — the majority of the Russian citizens live in cities. They are Moscow and St. Petersburg.