This article is about disasters. You will know what kinds of stroms are the most desctructive and how they appear. Three texts about disasters help you to master the vocabulary on the topic Weather. Список английских слов №2 (intermediate) 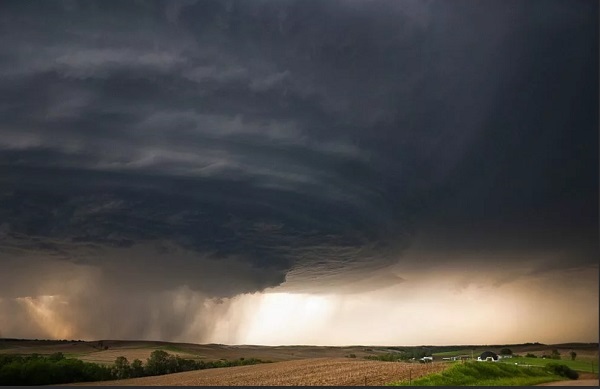 Storms are an important part of weather. Storms can produce hard rain, blowing snow, large hail, or damaging winds. There are different kinds of storms.

Let us start with a blizzard. It is a heavy snowstorm with very strong cold winds that can be blinding. A blizzard happens in the winter, when very cold air from the Arctic moves south and meets warmer air. In the result a blizzard starts. It has blowing snow and makes it difficult for people to drive or walk anywhere. If a blizzard is coming, it is better to stay indoors.

What is «a blizzard» in Russian?

Another storm is a hurricane, which starts over the ocean. The winds get faster and heavy clouds are formed. First, the hurricane grows, it can be hundreds of miles wide and last days or weeks. But finally it gets weaker and disappears.

Hurricanes form between June and December, but they occur most often in September. They usually happen along the Atlantic Coast or in the Gulf of Mexico.

In hurricane season, the weather service keeps a close watch. If a storm starts, warnings are sent out so that people in the area can go indoors or leave town, waiting for the storm to pass.

Every hurricane gets a name. The first storm of the year gets a person’s name that starts with the letter A. The second storm gets the letter B. Each storm that year gets a name beginning with a new letter of the alphabet.

One of the strongest windstorms of all is a tornado. It typically starts on a hot, sticky, cloudy afternoon. A tornado is formed when dry air from the north meets wet air from the south, causing dark clouds to form. The dark clouds start to change at the bottom, and a funnellike shape forms. This funnel grows until it reaches the ground, and then it starts to travel, roaring as it goes.

Tornadoes hit mostly in the Midwest of the USA, but they can also occur in other areas of the country. Usually tornadoes occur in spring or in summer. The storm usually does not last long, and the funnel soon disappears or moves on. People are advised to stay in a cellar and wait until the storm is over.

There are other types of storms, too, which add beauty and excitement to our lives. A snowstorm brings billions of snowflakes. When they are examined, no two are exactly alike. Each tiny snowflake has its own shape and beauty.

Almost everyone has awakened during a thunderstorm in the middle of the night. The noisy thunder and the bright lightning startle and excite spectators.

There are gentle rainstorms, too. When people hear the soft sounds of quiet falling rain, they often feel peaceful. Sometimes a rainbow appears in the sky as an enormous arch of colored stripes.

To sum up, there are many kinds of storms. Some of them are destructive, others bring a simple beauty to us. All the same, storms of all kinds are a part of our lives.

Answer the questions:
1. What kinds of storms can you name now?
2.What do the strong winds of a blizzard do?
3. Where does a hurricane start?
4. What sometimes happens after it rains?
5. Why is it important to know about storms?

The rotating wind of the hurricane is incredibly strong and reaches the speed of 119 km per hour. It has a counterclockwise direction. A hurricane also contains rain, thunder and lightning.

Hurricanes are formed over in the warm oceans near the Equator. These hurricanes are called tropical cyclones. If a hurricane is formed in the western Pacific Ocean, it is called a typhoon.

Hurricanes move from the ocean to the coast and cause huge waves, which together with violent wind can bring about extensive destruction. But hardly it reaches the land, it weakens as it is warm water that fuels a hurricane.  On the same reason hurricanes are never born in the cold oceans.

The Hurricane season in the Atlantic Ocean is from June,1 till November, 30.

The Hurricane season in the Eastern Pacific Ocean is from May,15 till November, 30.

Since 1950, all storms have been given names. The first human name was given to the Hurricane Alice in 1953.  Usually the storms were given female names, the first male name was Bob (1979).

Tasks on the topic «Disasters»

Task 1. Watch the video «What is a hurricane?» (pre-intermediate)

Task 2. Watch the video «How a hurricane is born?» (upper-intermediate)

What familiar words did you hear? Watch again and make a list of them.

Task 3. Write on your own. Describe a storm that you have experienced.

Читайте еще:
One thought on “Disasters. Texts in English for reading (intermediate)”