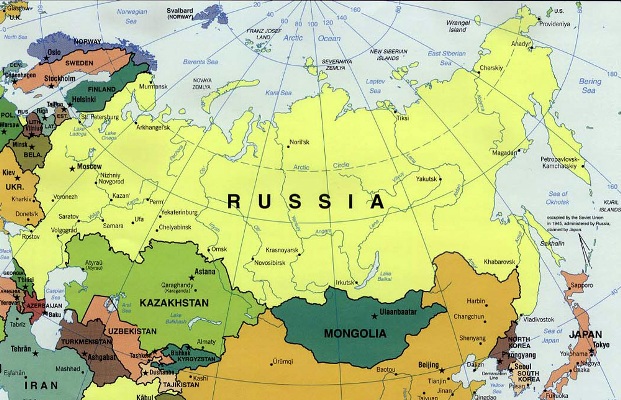 Russia occupies about one seventh of the earth’s surface (half of Europe and one third of Asia).

The Geographical Position of Russia, its Nature and Climate

2. Questions to the topic: «The Geographical Position of Russia, its Nature and Climate»

3. Answers to the questions on the topic: «The Geographical Position of Russia, its Nature and Climate»

4. Text on the Geographical Position of Russia, its Nature and Climate

Russia is the largest country in the world. It occupies about the one seventh of the earth’s surface. Russia covers the eastern part of Europe and the northern part of Asia.

The country is washed by 12 seas of three oceans:  the Pacific, the Arctic and the Atlantic. In the south Russia borders on China, Mongolia, Korea, Kazakhstan, Georgia and Azerbaijan. In the west it borders on Norway, Finland, the Baltic States, Belorussia, the Ukraine. It also has a sea border with the USA.

There is hardly a country in the world with such a variety of scenery and vegetation. Russia has steppes in the south, plains and forests in the central region, tundra and taiga in the north, highlands and deserts in the east.

Russia is located on two plains. They are the Great Russian Plain and the West Siberian Lowland.

There are several mountains chains on the territory of the country: the Urals, the Caucasus, the Altai and others. The largest mountain chain, the Urals, separates Europe from Asia.

In Russia there are long rivers and deep lakes. The Volga is the biggest Europe’s river. The world’s deepest lake is Lake Baikal. The water in Lake Baikal used to be very clean. It was so clear that if you look down you can count the stones on the bottom.

Russia has one sixth of the world’s forests. They are concentrated in the European north of the country, in Siberia and in the Far East.

Over the vast territory of the country there are various types of climate, from arctic in the north to subtropical in the south.  In the south-west the weather is usually mild and wet; northern Asia is one of the coldest places on the earth, and in the south the heat is unbearable. But in the middle of the country the climate is moderate and continental.

Russia is very rich in mineral resources. It exports oil and natural gas.

In recent years the political and economic situation in the country has started getting out of the crisis.

There are a lot of opportunities for our country to become one of the leading countries in the world.