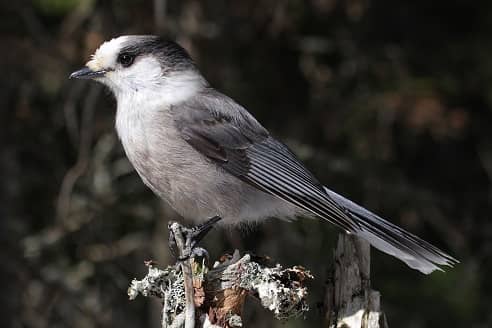 This story continues the set of texts about animals. It is about the bird that loves winter so much that never leaves for the warmer countries. More than that it nests in winter! Get to know one of the birds of North America. It is called Gray Jay or Grey Jay or the Whiskey-Jack. The text is for advanced English learners.

Text «Gray Jay — the Bird That Nest in winter»

Would you think some­one was serious if they asked you about bird nest­ing during winter in our hinterland, where the snow is deep, the weather is stor­my, and the temperature sometimes drops lower than 40 below zero?

Yet this is the only time you would be likely to find the nest of the happy-go-lucky Gray Jay or the Whiskey-Jack as it is more often called. Before it used to be called the Canada Jay, for it is a true Canadian and never grum­bles about the weather, nor goes south to avoid it, but stays here and knows how to live with it and enjoy it.

It is difficult to find a rea­son for the unusual nesting behaviour of the Gray Jay. It is a bird of the lonely hunter’s, camp, and shortly after the sound of a rifle or axe, the inquisitive bird is on hand to see what can be had. So intent are they in carrying off as much as they can, they seem to have complete disregard for hu­mans, If the pickings are good they awkwardly at­tempt to carry an extra morsel in their feet to save time. One has to see this to believe it.

The nest of the Gray Jay looks like a piece cut from a mattress, deeply cupped and tightly woven, made of tamarack twigs, fibre and plant down, and warmly lined with feathers, usually situated close to the trunk of an evergreen tree on the southeast side.

The eggs, usually four and sometimes five, are the size of the American Rob­in’s egg but grey, and are deposited during the latter part of February and by the first week in March, As the nest takes about two weeks to construct, nest building starts early in February, Oc­casionally the happy parents-to-be sit on the nest at the same time, usually facing in opposite direc­tions.

By the middle of May, before many migrants are back, the young Gray Jays are full grown and clever enough to teach their eld­ers a few tricks, Yet they are never allowed out of sight of their doting par­ents, and these family groups are a familiar sight all summer.

The Gray Jay’s strange nesting habits give this species an unusual place amongst birds of the Amer­ican continent.

This is the END of the text about the bird that nests in winter!