Where the Names of the Months came from (text in English ) 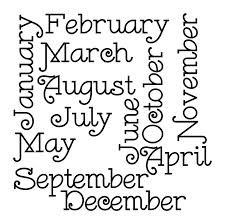 You know the names of the months but have you ever thought about their origin, about how they appeared in English?

Here is a story about how the months were called. Compare it with what you already know.

January was called after Janus, the two-faced Roman god. He was the god of beginnings and endings and was the protector of the Roman gates and doorways.

Once February was the last month of the year and came before January, but at about 450 B.C. it came the second month. Its name is derived from Februa, a Roman festival of purification.

March comes from the god of war – Mars. He was pictured in a chariot drawn by two horses.

The origin of word April is quite different. It comes from a Latin word which means “to open”. April is a spring month when nature comes to life again.

May was named after the goddess, Maia. She was the most famous of the seven daughters of Atlas.

It is undecided whether June gets its name from the goddess Juno, the beautiful wife of Jupiter, or from Junius, who was a proud man and head of a great Roman family.

July was named after Julius Caesar, who was born in this month.

August was named after the great nephew of Julius Caesar. His name was Octavius, but he changed it to Augustus.

September comes from ‘septem’, meaning ‘seven’. It is a reminder that it was seventh month when the year began in March.

October, November and December are Latin words for the eighth, ninth and tenth months of the year.