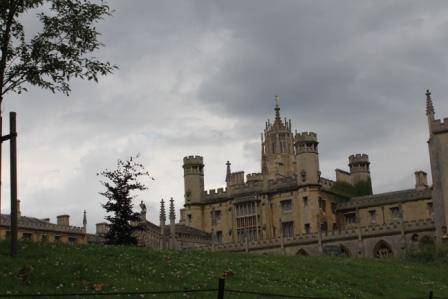 Have you ever been to the univercity town of Cambridge? If you visited England, you are sure to have been. It is a very picturesque town which is situated on the river Cam. The town is famous for its colleges. Most of them were founded in the old times. Now Cambridge is known all over the world as a great centre of science.

Cambridge was founded in the beginning of the 13th century, to be more exact in 1284, when the first college Peterhouse was built.  Cambridge is the second oldest university in the Britain. As you know, Oxford is the first one. They both are the most renowned universities in England.

Cambridge is more famous for Science and Oxford for Art. Now there are twenty-two colleges in Cambridge. Each college has its own traditions and atmosphere.

The ancient buildings, chapels, libraries and colleges are in the center of the city. There are many museums in the old part of the city.

Its population consists mostly of teachers and students. All students have to live in the college during their course. Most of the students in England live along – only one out of four students lives with his parents.

In the old times the students’ life was very strict. They were not allowed to play games, to sing, to hunt, to fish or even to dance. They wore special dark clothes which they continue to wear in our days. In the streets of Cambridge you can see young men wearing dark blue or black clothes and the “squares” – the academic caps.

To enter Cambridge, you need to fill out an application, the so-called UCAS-form, write a letter about how good you are, and then pass the interview. The problem is to pass exams.

If you’ve passed… …you are to attend classes only about 9 hours a week. However, it’s not as easy as it may seem to be, because you have to write two essays each week. In addition, you are supposed to express your own view of the problem. And you can’t just download the work from the internet or rewrite information from a book, as you have a personal discussion with the tutor. It’s impossible to cheat!

There are also some Cambridge traditions famous all over the world, such as: May weeks there are actually in June, or “suicide Sunday” – the day when everyone gets the results of exams. Cambridge is also renowned for its annual balls, organized by each college that happen in summer after everything is over.