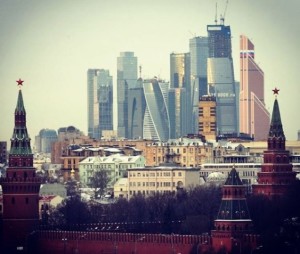 Moscow and St. Petersburg are the main Russian cities. Moscow is the capital of Russia. St. Petersburg used to be the capital of Russia under Peter the Great. The towns of Golden Ring such as Suzdal, Vladimir, Yaroslavl, Kostroma, Pereslavl Zalessky, Rostov, Sergiev Posad and others are also well-known all over the world. Below you will find the texts with some information which may help you to prepare for an English Exam.

Moscow stands on the Moskva river. It was founded in the year of 1147 by Uriy Dolgoruky. It began to rise in the 14th century. Under Ivan the Great it became the principal city of Russia. Though Peter the Great moved the capital to St. Petersburg in 1712, Moscow remained the heart of Russia. That’s why it became the main target of Napoleon’s attack. Three quarters of the city was destroyed by fire during Napoleon’s occupation but it was completely restored later.

Nowadays Moscow is the largest city of Russia. It is its political, administrative, economic, industrial, educational and cultural centre. Moscow is the seat of the Russian Parliament (the Duma).

Moscow has become one of the largest city in the world. Its total area is about 2561 square kilometers  (2016). By the way, the ancient Moscow occupied the territory of the present-day Kremlin. 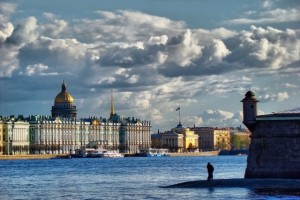 St. Petersburg is situated on the Neva River. The city lies on the islands. Canals and natural channels make St. Petersburg a city of waterways and bridges. It is an industrial city and the largest seaport.

Saint Petersburg was founded by Peter the Great in 1703 and was the capital of the Russian Empire for two centuries.It is one of the most beautiful cities of Europe. Since its foundation it has played an important role in Russian history.

St. Petersburg is known  as a city of culture. There are a lot of theatres, museums and historical buildings there. The most famous museums are the Hermitage and the Russian State Museum.

3. The Towns of Golden Ring 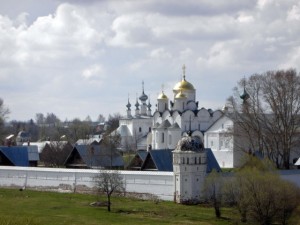 There are a lot of interesting towns and cities in Russia which are worth visiting. If you want to get acquainted with Russian culture you should visit old Russian towns. They are especially attractive by their cathedrals, churches and monasteries. It is Suzdal, Vladimir, Yaroslavl, Kostroma and others, known as towns of “Golden ring”. You can see a photo of Suzdal on the right.

Complete the gaps with the words:

Nearly all old Russian cities and towns have a lot of historical monuments, such as …. (1). They are valuable symbols of old Russian culture and catch the eye with such particular details as … (2). Some of them have become ruined by time and nearly have to be … (3). But local authorities usually … (4) and it …. (5) the possibilities for developing the town. The situation could be saved by making a city or a town … (6) as tourism could provide good profits for … (7), especially … (8) when a lot of people are on holiday. Although … (9)  requires such facilities as good hotels, souvenir shops, coaches, well-trained guides, and other things, it is worth doing because it will make a city … (10) as the present state of many of Russian old cities and towns may only … (11).

Questions on the topic «Moscow, St. Petersburg and the Towns of Golden Ring»