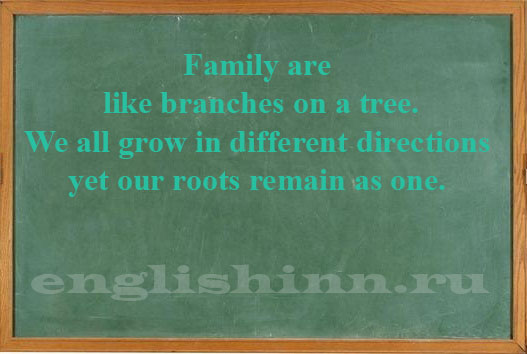 — Your name is George Smith, isn’t it?
— Yes, it is. I’m a designer. I live and work in New York. And what’s your name?
— My name is Pete Black. I’m an editor. I live and work in Baltimore.
— Are you married?
— Oh, yes. I’m married and I’ve got two daughters.
— I’ve got two daughters, too: Rose and Kate. What are your daughters’ names?
— They are Susan and Jane. Susan is nine years old and Jane is six. They both go to school. Do your daughters go to school?
— Sure. My wife Mary doesn’t work now. She runs the house and looks after the children. Do you have any brothers or sisters?
— Unfortunately not. I’m an only child in the family. I’ve got a cousin who lives in Chicago. We are on friendly terms.
— I’ve got a sister. She is much younger than I am. I’ve seen very little of her lately.

Test №1 on the topic «Family and Friends»

1. Your ( sister, cousin, aunt) is a girl or a woman who has the same parents as you.
2. Your (cousin, uncle, nephew) is the brother of your mother or father, or the husband of your aunt.
3. Your (mother- by-law, mother-of-law, mother–in-law) is the mother of your husband or wife.
4. Your (cousin, niece, nephew) is the daughter of your sister or brother.
5. Someone’s (cousin, nephew, stepbrother) is the son of your sister or brother.
6. Both parents should take care (about, of, for) their children.
7. When she was on holiday, she (made, did, met) a lot of new friends.
8. They are (with love to, in love with, in love to) each other.
9. He is a very sociable person and gets (along, at, on with) all his friends and acquaintances (знакомые).
10. James (became, fell, got) madly in love with Helen the first time he saw her.

Test №2 on the topic «Family and Friends»

1. He  (married, got married, married with) his wife Jane 37 years ago.
2. Mr and Mrs Brown are a nice old (pair, couple, unite).
3. What is the secret of their happy (wedding, marrying, marriage)?
4. She was close to both of her parents and was shaken by their (divorce, parting, separating).
5. You should (bring up, grow up, raise) children to be generous, not selfish.
6. He is very much a (marriage, married, family) man and needs to be close to those he loves.
7. The marriage (event, ceremony, affair) took place in a small country church.
8. They were (parted, divorced, separated) three years ago.
9. I’m married (to, -, with) Ted’s sister.
10. (A relative, A friend, An acquaintance) is someone who you know well and like, but who is not related to you.

Test №3 on the topic «Family and Friends»

1. (An orphan, A foster child, An adopted child) is a child whose parents are dead.
2. Jack and Jill quarreled a lot and finally decided to (grow apart, quit, break up).
3. The wedding feast went on until midnight but the ___________and the __________left before that (wife and husband, bride and groom, fiancé and fiancée).
4. He was still (alone, bachelor,  lonely) at the age of 50.
5. James had known Sally for three years before he made (an offer, a suggestion, a proposal).
6. She (broke off, stopped, refused) her engagement.
7. A (widow, widower, widowed) is a man whose wife has died and who hasn’t married again.
8. In high school, Mike didn’t (have meetings, have appointments, make dates) with girls. He was too shy.
9. A (bosom friend, comrade, mate) is a very close friend who you rely on and trust the most.
10. Helen, I want to (divide, share, lead) my life with you! Will you marry me, darling?

The condition of the British family is a frequent topic throughout Britain today. A typical British family used to consist of mother, father and two children. But in recent years there have been many changes in family life. Some of them have been caused by new laws, others are the result of social changes. For instance, as the law made it easier to get a divorce, the number of divorces has increased. In fact one marriage in every three ends in divorce, which gives rise to a lot of one-parent fami­lies. Society is now more tolerant of unmarried people, unmarried cou­ples and single parents than it used to be some years ago. The majority of divorced people marry again and sometimes take responsibility for a second family.

Close relatives and members of a family groups — grandparents, aunts, uncles, cousins — keep in touch, but they see less of each other than they used to. This is because people often move away from their home town to work, and so the family becomes scattered. The traditional season for the family reunion is Christmas when relatives travel many miles in order to spend it together.

In general, each generation is eager to become independent of par­ents in establishing its own family unit, and this fact can bring about so­cial as well as geographical differences within the larger family group. There are about 10 million old-age pensioners in Britain, of whom about 8% cannot live entirely independently. The government gives fi­nancial help in the form of a pension but it is becoming more and more difficult for the normal economy to support the increasing number of elderly people. Nowadays more than half of all old people are looked af­ter at home. Many others live in Old People’s Homes, which may be pri­vate or state owned.

Relationships within the family undergo certain changes. Parents treat their children more as equals than they used to, and children have more freedom to make their own decisions. The father is more involved in the process of bringing up children, mainly because the mother goes out to work. Due to increased leisure facilities and more money modern life provides wider opportunities for the individual to take part in activ­ities outside the home. Although the family holiday, which is usually taken in August, and often abroad, is still an important part of family life. Many children have holidays away from home, often with school or college friends or other organized groups.